The Problem with First World Problems

A still from the 'Water is Life' YouTube campaign.

Water Is Life is a worthwhile charity dedicated to providing ‘clean water to those in need’. Their video campaign ‘First World Problems Anthems’ has recently gone viral.

The ad features impoverished Haitians reading aloud tweets supposedly (but not actually) gleaned from the ever popular #firstworldproblems Twitter hashtag. In one scene, a young girl stands in front of an old yellow school bus (presumably her home), complaining how she hates it when her phone charger won’t reach her bed.

In another, a boy petulantly announces his dislikes of ‘leather seats (that) aren’t heated.’ As he speaks the camera zooms out revealing that he is sitting on a pile of rubble.

‘First world problems aren’t problems’, the ad lectures before imploring us to donate, which according to Water Is Life, is exactly what people are doing. The charity reports that donations have risen sharply since the campaign launched late last year.

As DDB, the advertising agency behind the campaign explained, "[A]lthough the #FirstWorldProblems hashtag was created as a self-mocking mechanism for the privileged, these tweets about 'problems' also showcase a lack of sensitivity about serious concerns." 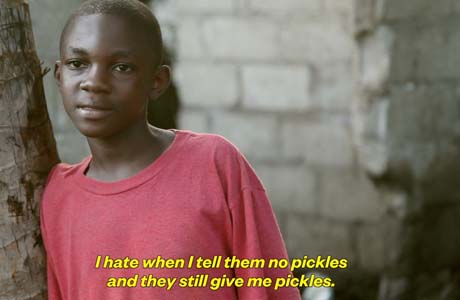 This is certainly true. However, the ad itself may be contributing to this lack of sensitivity by presenting a well-meaning but simplistic portrayal of the developing world, they're perpetuating the widespread idea that extreme poverty is the sum total of life in less privileged nations. As a result, the West has a one-dimensional view of the developing world that fails to recognise that these countries and their people are as fully complex as everyone else.

This depiction has been challenged by the makers of the spoof charity campaign Radi-Aid, who, in their Africa For Norway video, a parody of both Band-Aid’s ‘Do They Know It’s Christmas?’ and USA 4 Africa’s ‘We Are The World’, cheekily implore Africans, who are blessed with a warm climate, to band together and donate their unused heaters to the freezing Scandinavian population because ‘frostbite kills too.’

Radi-Aid is the initiative of the faux charity, Norwegian Students' and Academics' International Assistance Fund (SAIH), who are motivated to provide a more nuanced view of Africa than that portrayed in the media and by charity organisations.

"While there are negative issues that need to be reported and a lot of organisations are doing very important work, we are frustrated at the constant repetition of the same negative images," is how they explained it.

"Since the narrative tends to be the same as it was when development assistance first started some 50 years ago, it might give the impression that none of these efforts have produced any results and thus lead to apathy."

With that in mind, Radi-Aid aims to mess with commonly held stereotypes, not because they are untrue but simply because they are incomplete. Their parody deliberately shows a simplistic - but not untrue image- of Norway. There is a lot of snow and it does get cold. However, asks Radi-Aid,  ‘Imagine if every person in Africa saw the “Africa for Norway” video and this was the only information they ever got…What would they think about Norway?’ In other words there is more to Norway than blizzards, just as there is more to Africa than poverty.

The other problem with Water is Life is that, in announcing that ‘first world problems aren’t problems’, the campaign ignores the fact that some first world problems are still problems. Sure, getting garlic aioli with your chips when you asked for tomato sauce is indeed trivial. However, people in the first world also have to contend with, say, chronic underemployment resulting from the increasing casualisation of the workforce.

To blithely relegate trivial matters as ‘first world problems’ not only dismisses the very real issues that some first world residents face on a daily basis, it also prevents a mutual understanding between the West and the developing world because sometimes both 'worlds' experience the same problems; First world problems can also be third world problems.

Like Radi-Aid, Nigerian-American writer Teju Cole, who divides his time between Brooklyn and Lagos, objects to this one-dimensional view. However, Cole goes further in asking the West to look for common ground with the their world:

‘People in the West need a more robust sense of the lives of people in the darker nations…Connectivity issues on your blackberry, cost of car repair, how to sync your iPad, what brand of noodles to buy: Third world problems…All the silly stuff of life does not disappear because you are black and living in a poor country’.

Cole’s analysis demonstrates how this separation between first and third world, based on preconceived ideas of what life is like ‘over there’ cements the 'Other' status of non-western people. ‘Here’s a First World Problem: the inability to see that others are as fully complex and keen on technology and pleasure as you are.’

Cole argues that our limited perception of what life is like in the developing world hinders our ability to empathise with those who live there. Not to be confused with sympathy, empathy, of course goes beyond recognition of another’s suffering and signifies the ability to identify with them, to actually put yourself in their shoes. Instead, we've chosen to label experiences ‘first world’ and ‘third world’ as if these worlds are mutually exclusive.

It is a sad legacy of colonialism that we in the West still relate to the ‘Third’ world in way that largely fails to recognise that their humanity and ours is essentially one and the same. While our relationship is certainly one involving much sympathy, it often lacks empathy precisely because of this persistent ‘Us’ and ‘Them’ view.

The popularity of the ‘first world problems meme’ is indicative of how this lack of empathy is consolidated and exaggerated. Reducing entire multi-faceted countries to one-dimensional stereotypes, we exaggerate our superficial differences and miss the many similarities that unite us as human beings.