Should you really surround yourself with 'positive people' only?

Are we too quick to judge people with faux diagnosis like "narcissist", "psychopath" or "toxic"?

I first noticed it at my kid's playground, when a fellow mum used the phrase "negative energy" when describing her mother-in-law. "I can't be around it" she added. "I surround myself with positive people only."

Her mother-in-law certainly sounded critical so I nodded vigorously, thinking "Yeah, I hate negative people too!" But I had a follow-up thought back at home "Who actually likes negative energy? Goths?"

That's when another penny dropped. It seems to me that more and more people use descriptors like "toxic" and "negative" and homemade diagnoses such as "narcissist" and "psychopath" as a way to justify their dislike of the person. By grounding our umbrage in what seems like official --  and therefore inarguable – language, we are able to solidify our cases for avoidance of those co-workers, friends and relatives we deem less pleasant than ourselves. It's a convenient way of distancing oneself and othering the difficult person, all the while holding onto the moral high ground. 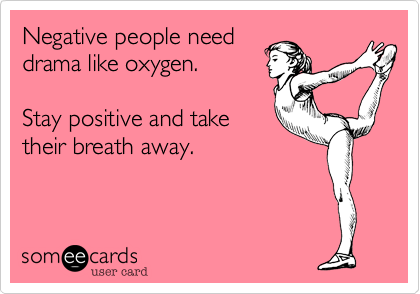 If the observation above seems presumptuous, let me assure you, I've been guilty of it myself. But if you need further examples, I'm happy to point you in the direction of almost any relationship-based reality TV series, where privileged, middle class pain is transmuted into an illness taken straight from the DSM-5.
You know the drill …

'Where's Bianca?'
'I had to severe ties with her. She's toxic. I'm pretty sure she's a narcissist'
'Oh wow. What happened?'
'She said she disliked the smell of my scented candles. She told me the overall bouquet was 'oppressive'. I mean, I can't be around a person like that.'

Obviously I'm not talking about an abusive relationship; I'm not suggesting that enabling an addict, or mentally ill person is the way forward, either. In cases such as these, labels are necessary and a "cut-off" is sometimes the healthiest move you can make.

But, if last week's report is anything to go by and we are now testing children as young as three for psychopathy? Well, we may have reached a tipping point. Psychopaths make up less than one percent of the population. Why are we screening to see if there is something wrong based on how our infant children look at us? Could it be because, in our haste to label and therefore other, we've let introspection, self-examination and personal responsibility slide?

As lead author of the "child psychopath" study, senior lecturer at UNSW, Eva Kimonis, told Fairfax, "The key things are trying to develop the child's emotional skills. We coach the parents how to be very warm, involved and loving." So if parents have the ability to change or at least minimise these traits, is it fair to diagnose the child at such a young age?

What if those we stamp as "sociopaths" simply lack tact and empathy? (Two things that can be taught). What if narcissists are insecure? "Oh, you don't know my boss." I don't, but I know the statistics – and both of these conditions are extraordinarily rare. Yes, dysfunction is real and it exists, which means many people exhibit traits of these conditions, it does not mean they are "born evil".

Besides, when we self-diagnose people we might be missing out on other valuable skills. When we interact with those we don't necessarily get along with, we gain insight, not just into their motivations but why exactly they bother us. Again, we don't need to stick around if a friend or acquaintance  is continually abusive, but a catty comment? A thoughtless slight? It's undoubtedly callous – but perhaps not cause to cut off all contact.

Social commentators often bemoan the elevation of charm over character in our society. We like to blame the internet and television and helicopter parents and "selfies" for spoiling our culture and our children. But what kind of example are we laying down when we point to all of the above externals instead of looking at ourselves?

And isn't it ironic, in this era of increased calls for diversity and awareness of mental illness, that we become so easily enraged when someone makes a gaffe? (Especially if it's on social media).

Speaking of social media, our feeds are peppered with slogans like 'life is too short for negative people" and "ignore anyone who says you can't succeed."  But is this useful? I'm not referring to trolls who truck in online abuse, and whose own hysteria negates their argument. But what if, by refusing to interact or discuss uncomfortable truths or receive feedback, we are weakening our own resolve? What if we are succeeding not in "fulfilling our dreams" but only in spreading that most popular of diagnoses, the ultimate psychological put-down of our time: entitlement?